When national and international movements or cities seek to create iconic civic statements to brand their charter or place, they turn to the remarkable skills of artists to make this happen. In this instance, the new global social movement of the Citizens of the Great Barrier Reef, now spearheaded by Earth Hour founder Andy Ridley, turned to one of Australia’s foremost public artists, Brian Robinson, to create a landmark artwork for Cairns (where the artist also happens to live). The brief was straightforward but immensely challenging: create an icon that would internationally identify Cairns as the premium gateway to this precious UNESCO World Heritage–listed asset. Visible from space, the Reef is the world’s largest coral reef system and the biggest structure on Earth made by living organisms.

Through this monumental work, Robinson realises his most ambitious sculptural commission to date. The Citizens Gateway to the Great Barrier Reef is an 11m-wide sculpture with a 6m-high helix depicting a wave of sea creatures and birds led by a life-size stingray. This captivating piece is designed to frame a view out to the Reef from the Cairns Esplanade. The commission, which required nearly two years of design and fabrication, reaffirms Robinson’s significance as an important contemporary Indigenous artist and one of Australia’s leading public art practitioners. Not only is the Citizens Gateway a symbol of a global social movement but it will also surely become one of Australia’s most important cultural tourism drawcards.

Although inspired by a television conversation between former US President Barack Obama and legendary BBC documentary filmmaker Sir David Attenborough, the commission would not have been realised without the vision of Alex de Waal. The former CEO of Tourism Tropical North Queensland (TTNQ), Alex is the current Chairman of the Citizens of the Great Barrier Reef Foundation, which aims to engage the world in the future of the Reef and to positively impact the future of this invaluable natural resource. Alex’s passion for the protection, understanding, and conservation of the Great Barrier Reef has also inspired the support of all levels of government, including Cairns Regional Council, and the Australian and Queensland Governments.

Brian Robinson is of the Kala Lagaw Ya and Wuthathi language groups of the Torres Strait and Cape York Peninsula. Born in 1973 on Waiben (Thursday Island), Robinson is an internationally recognised artist based in Cairns. Through his dynamic practice, Robinson convincingly fuses Torres Strait cultural traditions with Western art history and popular culture to realise a complex artistic vision. Robinson says this artwork reflects his Indigenous heritage and demonstrates the Great Barrier Reef’s connection to the cultures of both Aboriginal and Torres Strait Islander people. As he comments, “The stingray is my family totem from my mother’s people, the Wuthathi from Shelburne Bay … Adding to its aesthetic are marks drawing on the carving traditions of the Torres Strait, the distinctive graphic style with origins in Melanesian artistry, in the rhythmical forms of pattern and dance.”

The artwork has also involved collaboration with local Traditional Custodians, the Gimuy Walubara Yidinji people and the Yirrganydji people. In addition to the sculptural element, three local Yidinji artists and three Yirrganydji [Irukandji] artists have created stingray designs. Designs by Gimuy Walabura Yidinji artists Seith Fourmile, Hendrick Fourmile, and Paul Bong, and Yirrganydji artists Shannon Shaw, Patricia Singleton, and Karen Wallace have been sandblasted into the ground plane of the artwork. They represent modes of visual expression and the cultural life unique to Tropical North Queensland. They underscore the significance of the Reef and the ocean to the culture of these groups.

“Stingrays capture the spirit of the Citizens of the Great Barrier Reef as they glide over the Reef without touching the coral, just as humankind should not touch the Reef,” suggests Robinson.

This international launch caps off a remarkable year for Robinson which includes exhibiting at the National Gallery of Australia’s Indigenous Art Triennial Defying Empire: 3rd National Indigenous Art Triennial; showcasing work at Sydney Contemporary, Carriageworks, courtesy of Mossenson Galleries; winning the Major Award ($15,000) in the Hazelhurst Art on Paper Award; and participating in Australia: Defending the Ocean, an exhibition that coincided with The Ocean Conference (5–9 June 2017) held at the United Nations Headquarters in New York.

Citizens of the Great Barrier Reef was established to empower current and future generations of the world with the knowledge, experience and ability to protect and enjoy the Great Barrier Reef. Its mission is to drive and communicate positive action with tangible outcomes for both this World Heritage area and our planet. For more information, and to become an active Citizen, go to CitizensGBR.org.

Brian Robinson and CREATIVEMOVE would like to recognise and sincerely thank the Traditional Custodians from the Gimuy Walubara Yidinji people, especially Gudju Gudju (Seith) Fourmile and the Yirrganydji [Irukandji] people, especially Jeanette Singleton.

Australia: Defending the Ocean, was presented at the UN Headquarters in New York by Arts d’Australie • Stéphane Jacob, in association with Suzanne O’Connell Gallery. This exhibition received support from the Department of Communications & the Arts, the Department of Foreign Affairs & Trade and Brian Robinson’s participation was supported by the Australia Council for the Arts. 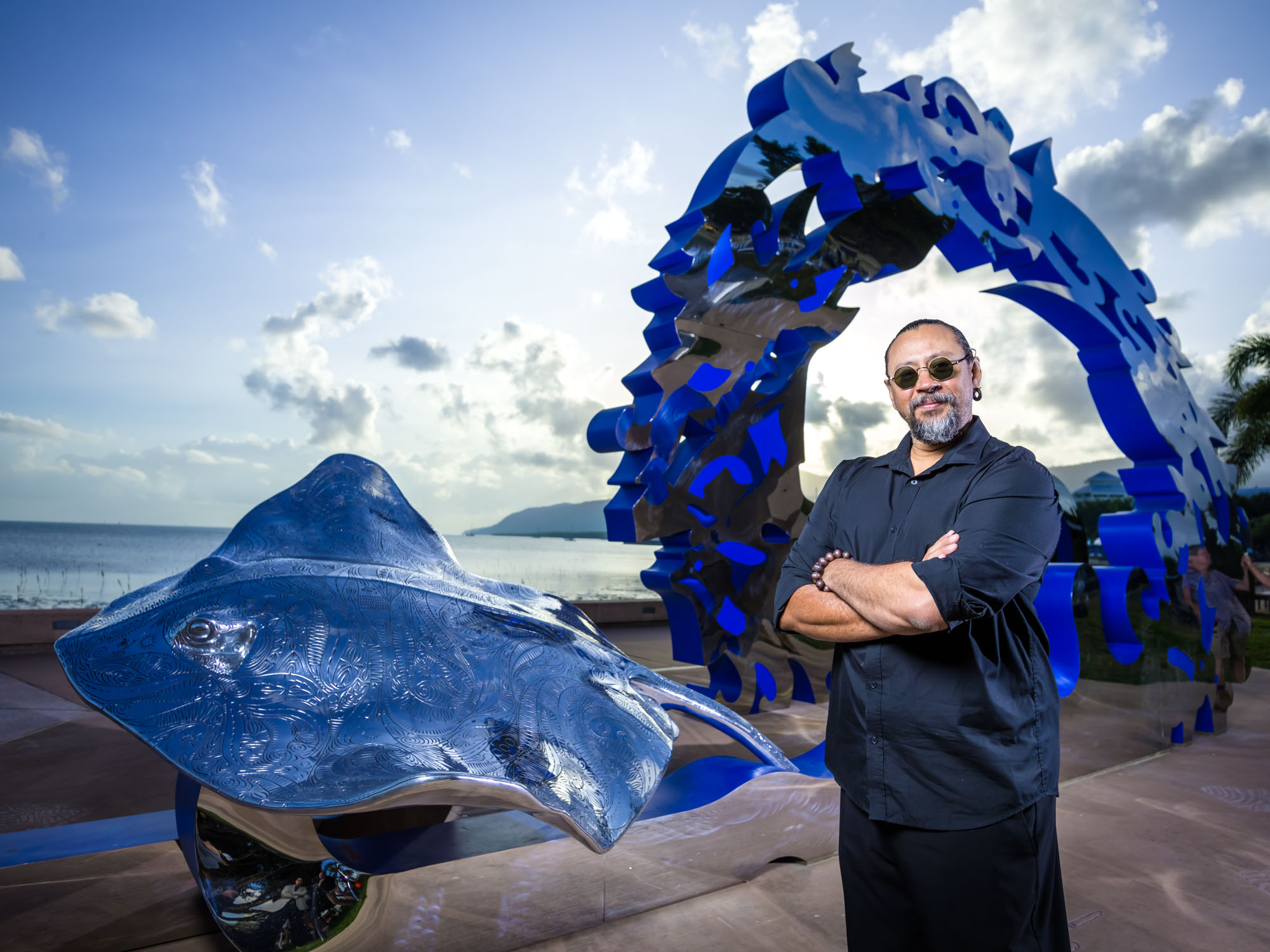 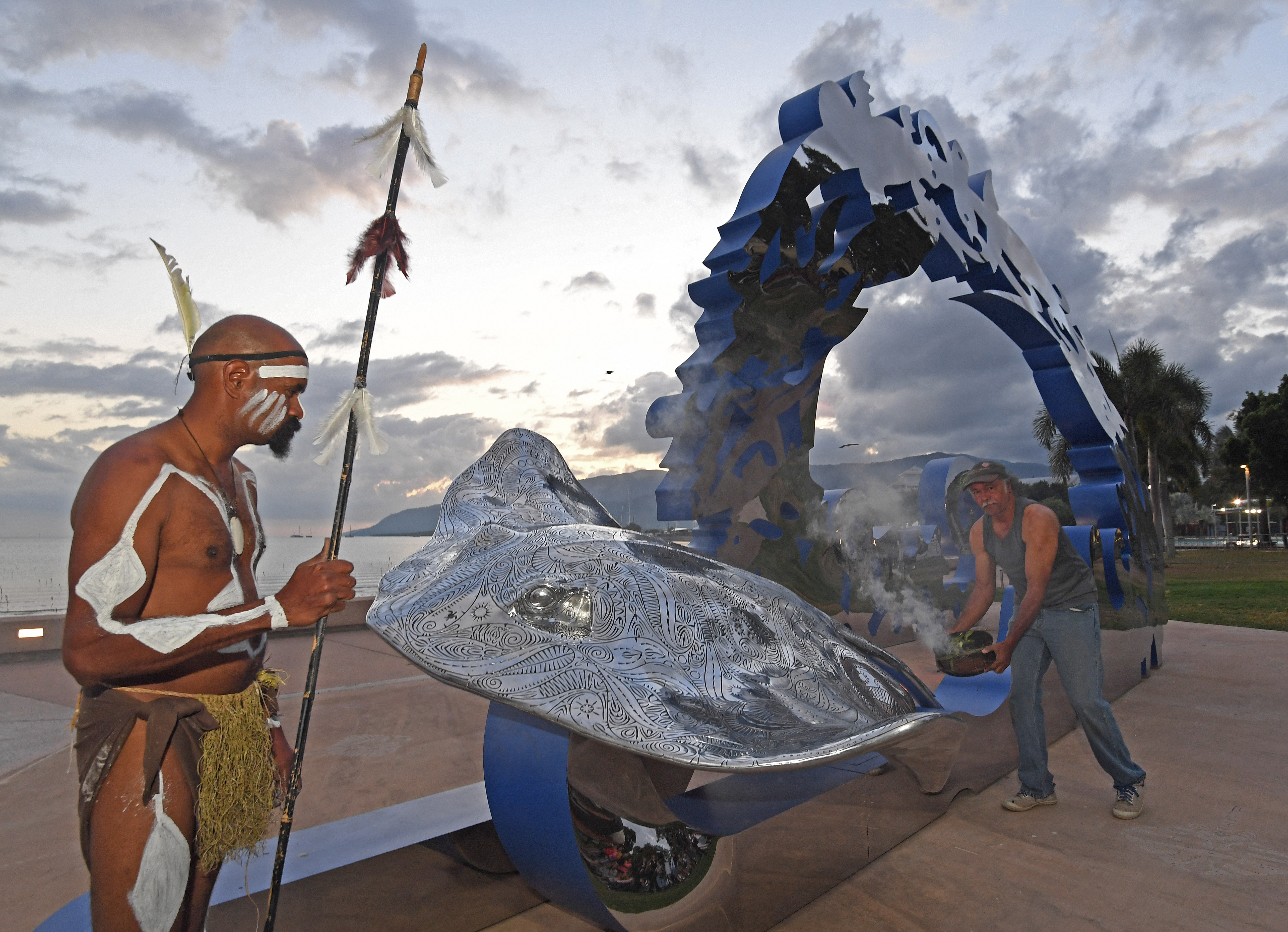 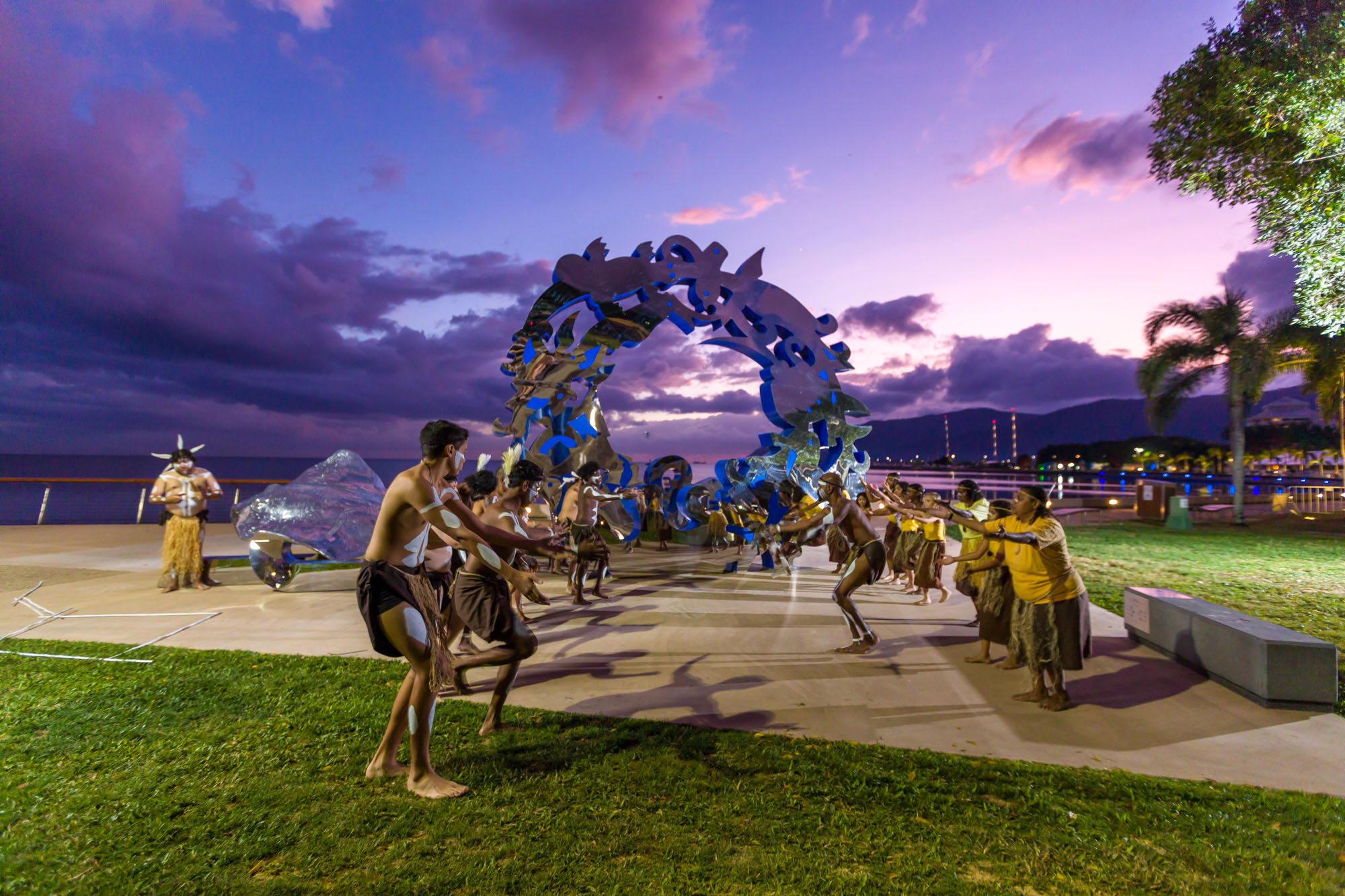 Traditional Custodian dancers from the Gimuy Walubara Yidinji people welcome the dawn as it breaks over the Reef guardian, the Citizens Gateway to the Great Barrier Reef. Photo: Brad Newton. 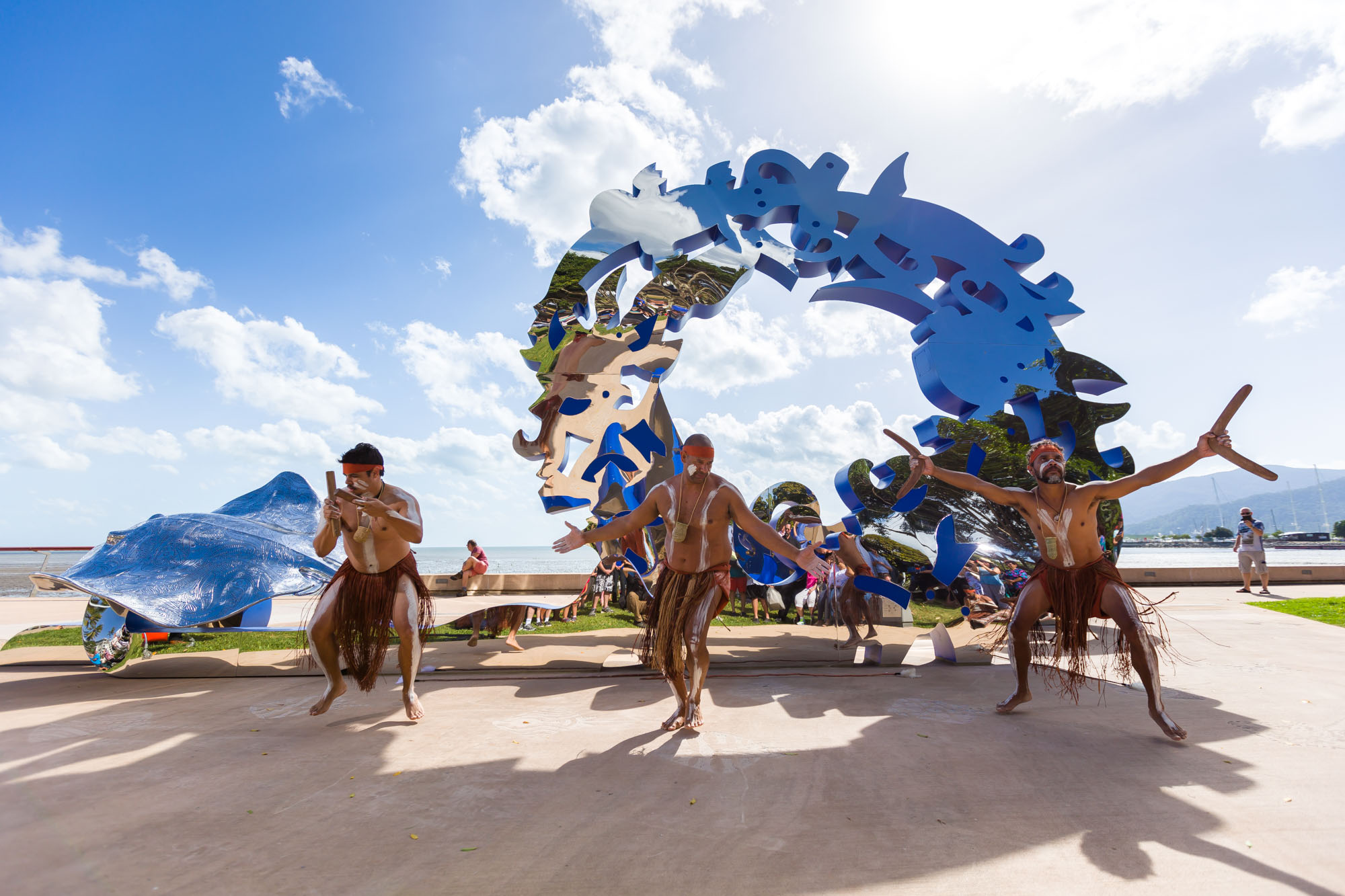 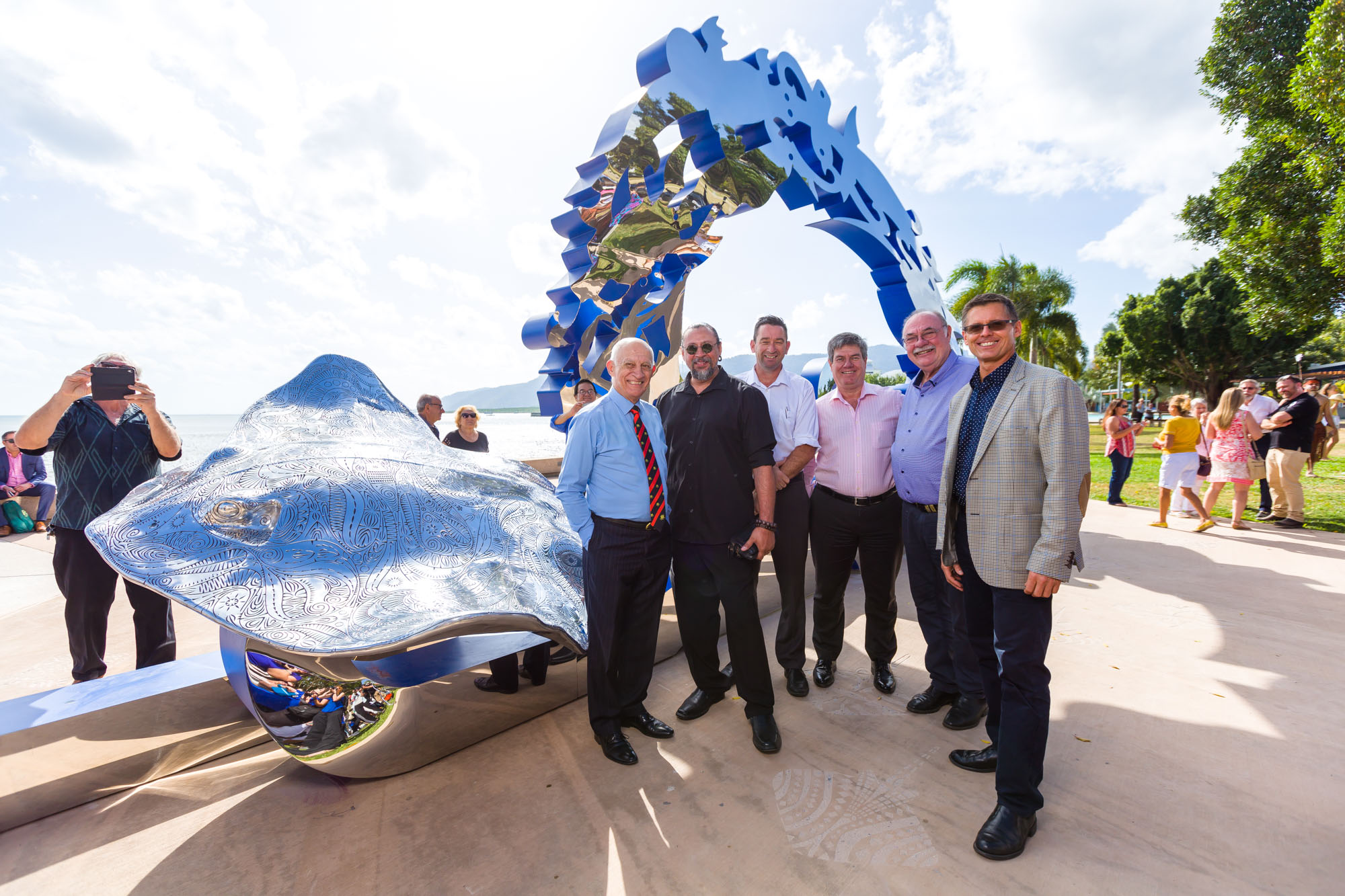 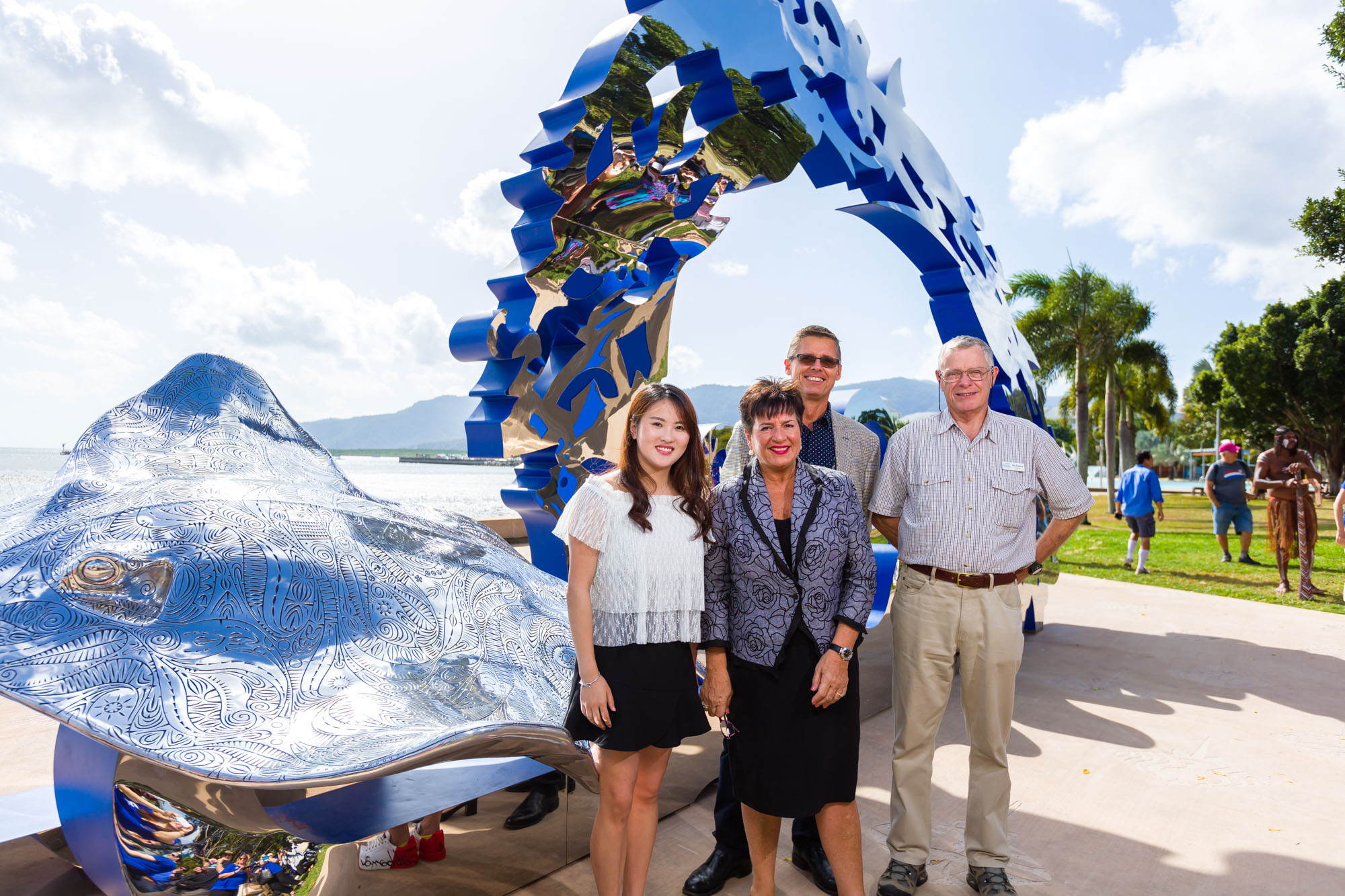