Brisbane Airport’s International Terminal is set to undergo a $45 million redevelopment, with local Brisbane architectural practices Richards and Spence and Arkhefield leading the transformation with artwork curatorship by mc/k art. Queensland artists, Sebastian Moody and Mirdidingkingathi Juwarnda Sally Gabori, have been commissioned to be a part of this creative makeover. Global travel and branding guru, and editor-in-chief of Monocle magazine, Tyler Brûlé, is also said to have a role in contributing his design thinking sensibility to the project.

While both conceptually and stylistically diverse in art-making practice, both Gabori and Moody will provide distinct and engaging artworks for the discerning international traveller. Gabori is undoubtedly one of Australia’s most renowned Indigenous artists and her idiosyncratic and exceptional paintings are widely acclaimed and admired for their vitality, immediacy and intuitive use of colour.  Moody is best known for his popular large-scale text works in the public domain which he has been creating for over ten years. His text works have appeared in vehicular underpasses, swimming pools, personals ads, kitchen splashbacks, coffee shops, hang-gliders and as shopping receipt ‘portraits’.

Brisbane Airport Corporation’s (BAC) CEO and Managing Director Julieanne Alroe says the investment will transform the terminal to feature a more distinctly Brisbane design. “Most airport terminals are alike, no matter where you are in the world. Few have a real sense of the destination and community they serve. Brisbane is about to break that mould and set a new world-best standard for terminal design,” says Alroe. Expect high vaulted ceilings, wooden decking, water features, natural light flooding into the terminal and plenty of greenery – mostly live trees, ferns and shrubs but also a fake grass strip as a centrepiece of the waiting area.

Clearly BAC intends to value-add to the most ambitious project since the terminal’s opening in 1995 through the increase of its public art collection at both terminals and within the Skygate precinct. The renovations will reinvigorate arrival and departure areas, as well as expand retail space and work is scheduled to commence in February 2014 for completion in mid-2015. 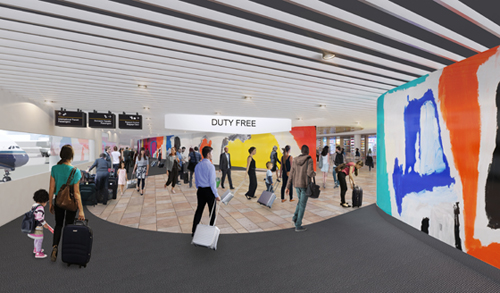 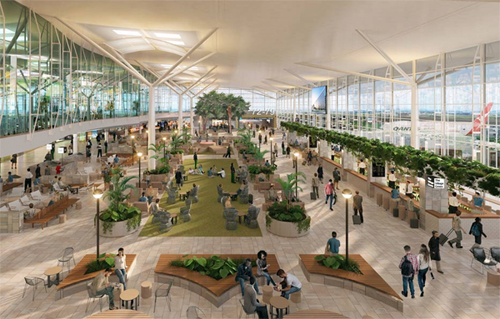