There is a lively permeability in Mandy Ridley’s work that may be its primary defining characteristic. It has fluidity, physical and metaphorical openness, and a drawing together of influences across many art forms–art, craft, and architecture–united by pattern, colour and its reach into other cultures.

In 2016, Ridley has been recognised with the award of a three month residency in Delhi that acknowledges and promotes her ability to engage with and extend the practice of other artists whilst creating new work, and further developing innovative cultural conversations across continents. This Asialink Residency, from 12 September to 12 December 2016, recognises Ridley’s ability to make connections by facilitating access to an innovative project and its artists over this extended period.

Ridley is perhaps best known for her work in Australia’s public realm – its physical form realised for example in the painted pattern and colour that has transformed Ernest Street’s previously grungy concrete underpass (Flourish!, South Brisbane), the Lake Orr Spinning Fish (for Delfin at Varsity Lakes, Gold Coast) and the drawings she elicited from local children for permanent rendering on the Cabbage Tree Creek Bikeway (Aspley, in Brisbane’s north). Her approach is developed for the site and the opportunity. Its variable look and mood is also evident in her studio practice, with work that traverses scale from intimate to monumental, across different media and styles. Perhaps most notably, Ridley’s practice is embedded in a cultural conversation–with Asia and particularly, in the last fourteen years, India.

At the heart of this varied body of work is Ridley’s growing network of artists–across continents and cultures. Trained originally in a graphics tradition, Ridley completed her Masters in Fine Art in 2000. Her visits to India in recent years have yielded an ever-growing circle of cultural colleagues and friends, connections and stimulation that she embeds in a burgeoning artistic arsenal. Her approach and aesthetic is driven by a broad understanding of the interests of artists from all over the world, which she achieves using the platforms offered by social media, an international and digital equivalent of what she describes as, “talking around the village pump”.

During her Asialink residency, Ridley will work in New Delhi within the Nizamuddin Urban Renewal Initiative, a project set up under the Aga Khan Trust Historic Cities Programme, with two groups of women. She says, “These women utilise traditional craft skills, like Sanjhi (paper cutting) and embroidery, both of which are explored in my own work. Engaging with them will allow me to connect with and to share our skills. I am hoping that my own experiments will result in an installation that may be considered for presentation at the time of the Kochi-Muzuris Biennale, in late 2016.” A tangible physical outcome of the residency is likely to reflect her particular interests in Islamic design, traditional craft, and spaces of engagement.

Ridley suggested, “My art practice is focused on warm and meaningful engagements with people of disparate cultural circumstances. This has always been difficult to formalise and document, but the threads of this cultural way of working are woven deeply in my being and the work which results. I expect that this project will allow my desire for cultural collaboration to manifest at an even deeper level in my work.” 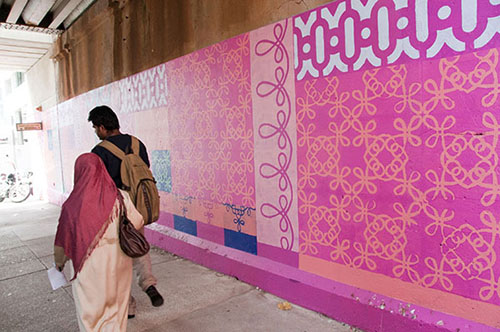 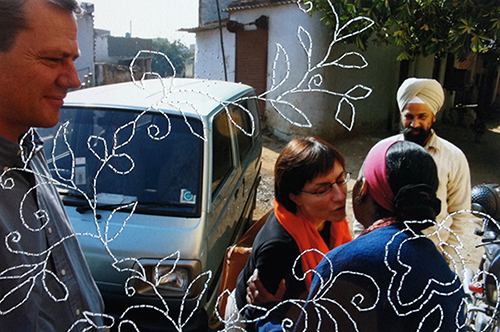 * This residency is supported by Arts Queensland